What is Tinnitus? | Hearing Loss Solutions 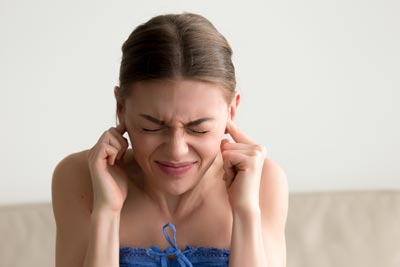 While tinnitus typically begins with a hearing loss, it is not exclusively an auditory problem. It is a result of neurological changes within the auditory system and within the parts of the brain that influence conscious attention and emotional state. No single explanation applies to all cases, but the process outlined below describes one of the more commonly accepted theories about what causes tinnitus.

When the natural balance is upset by a hearing loss, the neurological activity is altered, and this altered activity is then interpreted by the brain as sound. This results in whistling or ringing sounds commonly known as tinnitus.

Tinnitus most commonly results from hearing loss caused by exposure to excessive or loud noises, however it can also be caused by aging, ototoxic drugs, Temporo-mandibular joint disorder (TMJ), depression, anxiety, Lyme disease or thyroid disorders, as well as ear infections or wax in the ear.

Normally, background neurological activity in the brain is covered up by everyday sounds.

Neurological changes may then cause the perceived sound to be more noticeable and disturbing.

For some people, the presence of tinnitus is troubling, and so the brain treats it as important and focuses on it, increasing awareness.

This “increased awareness” can lead to stress, resulting in further enhancement by the emotional centers of the brain, and further amplification of the tinnitus.

Additionally, the brain can try to compensate for the hearing loss by “turning up” the sensitivity of the hearing system. This not only amplifies the tinnitus but can also make ordinary sounds uncomfortably loud for some people, further adding to stress and anxiety.

The result is a cycle of symptoms that can be self-reinforcing, leading to progressive worsening of the tinnitus over time. These factors have made tinnitus very difficult to treat in the past.

The good news is that Neuromonics has developed a breakthrough treatment that can significantly reduce tinnitus awareness and disturbance for over 90% of suitable patients affected by tinnitus.